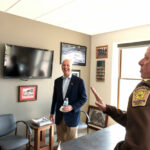 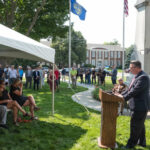 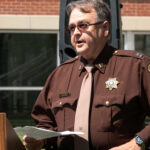 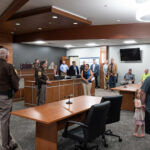 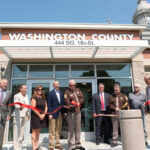 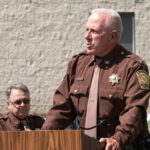 A ribbon cutting to celebrate the opening of the long-awaited $24.5 million Washington County Justice Center commenced Thursday afternoon.
Members of the public, Washington County Board of Supervisors and law enforcement officers were invited to listen to guest speakers and have a chance to tour the facility.
Board of Supervisors Chairman Steve Dethlefs hosted the program, with several officials speaking on the project, including Gov. Pete Ricketts, who served as the keynote speaker.
Dethlefs said the official opening of the justice center was “historic.”
“This is the single-largest investment the county has ever made,” Dethlefs said. “We’re making the necessary investments and fiscal plans and people that will serve and protect the people of this county.”
Capt. Rob Bellamy, jail administrator, gave an overview of the project.
“For years, county officials have discussed the concerns regarding the jail overcrowding in Washington County,” he said. “We are about to realize what nine years of planning, three years of construction and countless hours in pursuit of a dream will offer: a better and safer jail.”
Though Bellamy, who will retire in August, said there were some issues with the project over the years, he was proud of the facility and the people he worked with.
“We survived the pandemic and endured a great deal along the way, and I loved every minute of it,” Bellamy said. “I’m extremely proud of what we have done here.”
Sheriff Mike Robinson recognized several people during his speech, including Weitz Construction, Prochaska and Associates and the Board of Supervisors.
“I felt like we might never achieve this milestone,” Robinson said of the project. “I’m very proud of the end product that we’re able to provide the great citizens of the community.
“Specifically, I have to thank Rob Bellamy. We’ve been through this together for the last nine years. There were times I was down and depressed, and Rob kept me going.”
In an interview with the Pilot-Tribune, Ricketts said the new jail facility is an important addition to the county and to the state of Nebraska.
“I think what it says is the citizens of Washington County are supporting law enforcement, that they understand the need to protect the public safety and that the county leaders here have done a good job communicating how this will actually help save taxpayers’ money in the long run and make the facility more secure,” he said. “Because of the two-way video (inside the cells), they’re going to actually allow the inmates here to have better contact with their families. That’s a step that helps the folks who are incarcerated be able to get re-integrated back into society.”
In closing, County Attorney Scott Vander Schaaf said many people contributed to the justice center project.
“This project was a long journey,” he said. “It involved many people to see it to the end. On this special day, I encourage everyone here to take a tour of this facility. I think that when you do, you’ll be as proud of it as we are. It’s because of this great community, the people of Washington County, that we are able to share this with you.”
The Washington County Justice Center is nearing completion – come help us celebrate!
On Thursday July 8, 2021 at 3:30 P.M. there will be a “Ribbon Cutting Ceremony” To celebrate the completion of our Justice Center.
On July 10, 2021 Washington County will be hosting an Open House from 10 A.M. to noon, with public tours of the new facility.
Ground breaking began on the project in August of 2019 and the project is slated to be completed on about the 10th of July. The facility consists of a Sheriff’s Office, court room and court offices, refurbished County Attorney offices, and a correctional facility.